start your search with us today

This is a story about Ahmad.  Having been working for an international NGO in Kabul, Ahmad and his family were at risk of persecution and needed to escape the Taliban.  If you were like me, watching the scenes of chaos at Kabul airport unfold was terrifying and I could only imagine the horror of actually being on the ground.  Fortunately, Ahmad, his wife and their toddler were evacuated by the British Army, in Operation Pitting and subsequently given asylum by the British Government.

Despite all he had been through, living in temporary accommodation and being in new and unfamiliar surroundings, within days of arriving in the UK Ahmad told the officials from the DWP that he didn't want to rely on state support and started to look for a new job.

Ahmad is hugely likable, intelligent and incredibly resilient.  He is also an experienced internal auditor and it is in this field he wanted to continue his career, which is how we came to talk.  Two things that stood out in our first conversation were firstly his desire to repay what he saw as the kindness of the British people who had rescued him and secondly his motivation to repay the faith of whoever employed him.

Ahmad's story resonated with me because my father also had to escape from conflict, coming to England at the start of WWII.  Like Ahmad, my father wanted to repay the kindness he felt he had been shown and this felt like an opportunity for me to pay it forward. 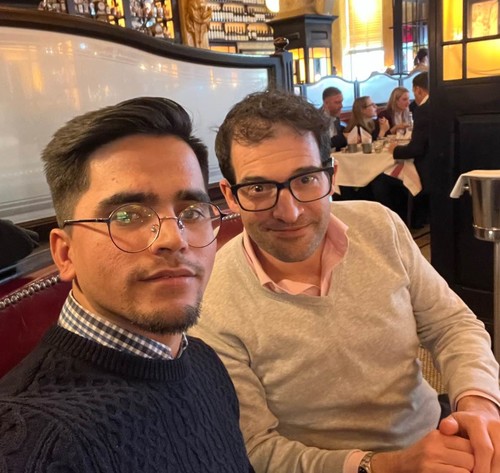 I’m delighted to say that the UK internal audit community and financial services sector stepped up and Ahmad landed a great job, with a FTSE100 financial services firm as a Senior Internal Auditor.  It is testament to his skills, experience and attitude that he achieved this and I’m absolutely delighted for him.

I’m also very grateful to all the Hybridge clients who responded to our request and agreed to meet with Ahmad and special thanks to the firm that Ahmad is joining.  You absolutely exemplify what Diversity and Inclusion is about and you are stronger for it.  In fact we all are.

I don’t know about you, but the next time I hear the words “asylum seeker”, “immigrant” or “refugee” I’m going to think of Ahmad and hope they are given the same opportunity to make similar headlines to Ahmad's.